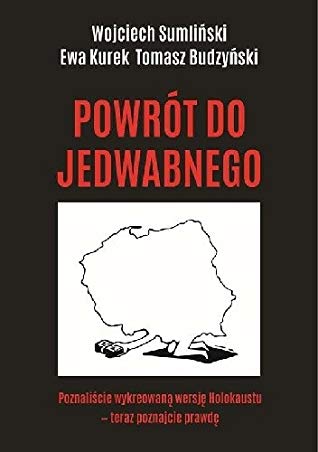 The Banned Book That Many Jews Are Afraid Of: Holocaust Industry Terezin Tentacles, and The Jedwabne Lie is Unravelling: Bullet Casings Under Lenin Statue Prove German Guilt

RETURN TO JEDWABNE is the title of this Polish-language book. Author Wojciech Sumlinski, in order to launch this book, was scheduled to speak in a number of locations in Poland. These were suddenly last-minute canceled as a result of Jewish pressure. When he finally secured a place to speak, and did so to a huge audience, the critics abruptly changed their story. They were now saying that Sumlinski himself engineered the earlier disinvitations in order to drive up sales of his books. Yeah, right. You can’t make this stuff up!

Author Sumlinski had a fascinating discussion with Jerzy Kwasniewski, the President of Ordo Iuris (pp. 282-297). The discussion pointed out that international law can be “made up” arbitrarily, to be applied ex post facto, and to trump pre-existing national laws. The Nuremberg Trials are a classic example. The German defendants had not broken any German laws. Instead, they were charged in accordance with newly-minted international law, which trumped German law, and which furthermore was applied retroactively to their acts. (p. 286).

The Terezin Declaration, having won at least the tacit approval of many nations, has elevated Jewish-centered “property restitution” claims to at least the level of international expectation, if not yet exactly international law. (p. 294). Furthermore, the U. S. government added weight to all this through Act S. 447. (p. 289). Wladyslaw Bartoszewski, merely by being physically present as Poland’s representative at Terezin, added credence to its claims against Poland. (pp. 290-291). It does not matter that he did not agree to any property restitution claims!

THIS INVESTIGATIVE JOURNALIST REALLY KNOWS WHAT HE IS TALKING ABOUT

Throughout this book, Sumlinski shows an excellent grasp of Polish-Jewish relations. He is quite familiar with Art Spiegelman’s Poles-are-Pigs in MAUS. (p. 48). He realizes that some Jews want to monopolize Jewish suffering (e. g, p. 40, 68). Truth does not matter.

Is it Poland or Polin? Sumlinski objects to President Duda’s reference to Polin as virtually interchangeable with Poland. (p. 240-241). For one thing, Polin means a “place or rest”, and a transitory one. In addition, and with some mostly-recent exceptions, Jews had never been part of Poland. They had been strongly separatist.

To foreign visitors, the Nazi German death camps on Polish soil become a focus of hatred–not against Germany but against Poland. Sumlinski wonders if the Austrians did not do a wise thing in just having a commemorative tablet set up to the concentration camp at Mauthausen-Gusen. (p. 73).

This book is, in a sense, a mini-encyclopedia on Polish-Jewish history. It does not conform to the standard Judeocentric narrative. However, Sumlinski does not dislike all Jews, only those who tell lies about Poland. (p. 84).

Not surprisingly, Jews are generally not interested in the truth about Jedwabne: They just want to promote the narrative of Polish guilt. (pp. 39-40). Much of the Polish government does not want the truth to come out either, as this would shed a harsh light on its earlier policy of unilateral appeasement.

The case of Wilkomirski is instructive. (p. 61). He was highly praised and awarded for his testimony of surviving the Holocaust. Then he turned out to be a Holocaust fraud. But no matter: It was now said that his testimony was nevertheless valuable because the pain he felt was “authentic”. How Orwellian!

Think about this: The world remembers the Jews’ Warsaw Ghetto Uprising (1943), in which a FEW HUNDRED Jews fought, more than they remember the Poles Warsaw Uprising (1944), in which TENS OF THOUSANDS of Poles fought. (p. 141).

Pawel Spiewak (pp. 78-81], the onetime director of the Zydowskie Instytut Historyczny (ZIH), goes around making reckless accusations of Poles as (what else?) anti-Semites and Jew killers. [He also wrote the book ZYDOKOMUNA…, wherein, instead of debunking Judeo-Bolshevism, he inadvertently brings up evidences that support it. See my review]. And ZIH is funded by Polish taxpayers. (p. 80). Spiewak is in good company. Stalin also went around accusing Poles of being anti-Semites (p. 145), perhaps ironic to his own anti-Semitism.

THE HOLOCAUST INDUSTRY: UP TO ITS OLD TRICKS

Sumlinski (p. 63) recounts the modus operandi of the Holocaust Industry in shaking down the Swiss banks for money. They organized a boycott of Jewish firms in Florida, Pennsylvania, California, and Michigan. In August 1998, the Swiss banks caved. Only part of the money went to actual Holocaust survivors. For more on this, see my review of: Between the Alps and a Hard Place, by Codevilla.

With reference to Act .S447, Sumlinski (p. 284) notes the galling irony of the very notion of heirless property now becoming the property of some specified group. He also accuses the PiS government doing virtually nothing about it (p. 300), and, worse yet, of stroking the public by promulgating false assurances about the innocence of the Terezin Declaration (after all, “we haven’t signed anything”).

The “legs” of the Jedwabne lie attest to both the power of the Holocaust Industry and the weakness of the Polish government. (p. 189). We see it all the time.

THE JEDWABNE LIE GETS A HEAD OF STEAM

At the 1949 Lomza trial, the judge realized that Eliasz Gradowski and Abram Boruszcaka were lying, and are not eyewitnesses. Incredibly, he did not throw out their testimony, saying that they “may have heard something”. (p. 169). Blatant hearsay!  The tale grew taller and taller.  In writing his “pathbreaking” NEIGHBORS, Jan T. Gross relied on Szmuel Wassersztajn, who was not an eyewitness.

The IPN investigation into Jedwabne, which began in 2000, was a foregone conclusion. (pp. 173-174). The Poles were “guilty” long before the investigation had even begun! Polish President Kwasniewski already had apologized for Polish guilt, as had many bishops, soon after Gross came out with his NEIGHBORS. The then-leader of the IPN who directed the investigation, Leon Kieres, personally travelled to the USA to apologize to the Jews for “this Polish crime.” And then we had the IPN “investigation”.

Although the 2001 preliminary archeological dig established that the number of Jedwabne victims cannot, at most, be over 400, the media keeps repeating Gross’ lie of 1,600 Jedwabne victims. (p. 271). Propaganda films were subsequently made to reinforce the Jedwabne lie. These include WHERE IS MY OLDER SON CAIN? and POKLOSIE. (p. 215).

THE WHEELS START COMING OFF THE JEDWABNE LIE

At the 1949 Lomza trial, the cook Julia Sokolowska testified that she cooked meals for 68 Germans at Jedwabne. (p. 171). Eyewitnesses Zelik Zdrojewicz personally saw the Germans herd the Jews into a barn and set fire to the barn. (pp. 150-151). In fact, eyewitnesses that point to German guilt number in the tens! (p. 151). Rywka Fogiel (p. 150) also affirmed German responsibility, until, decades later, she changed her story and—lo and behold—now blamed the Poles. (p. 152).

Einsatzkommando Obersturmfuhrer Hermann Schaper is known to have taken part in the mass murders of Jews at Wizna (July 5, 1941), at Wasocz (July 7), at Radzilow (July 10), and at Tykocin (August 22)(p. 278). Chaja Finkelstein and Izaak Feler picked out a picture of Hermann Schaper as the one who led the killings of Jedwabne’s Jews. (p. 176).

The Jewish-accusatory narrative began to crumble. The preliminary archeological dig at Jedwabne, in 2001, exhumed the statue of Lenin, and found him in a location that was not in accordance with the statements of the Jewish accusers. (p. 182). German bullet shells were found at Jedwabne during the 2001 archeological dig, and Sumlinski goes beyond other authors in showing that they cannot be explained away. Some of them are from Mauser and Mosin firearms. (p. 181-182). What’s more, some of them come from the Mauser 7.92 caliber machine gun MG 42! (p. 185). [So now Poles were supposed to have German machine guns??] Although the MG 42 went into production in late 1941 (after Jedwabne), prototypes of it went into use back to the summer of 1939, just before the German attack on Poland. (p. 186). Conclusive proof that the bullet shells cannot come from earlier or later events comes from the fact that some of them were found UNDER Lenin’s statue! (pp. 186-187, 214, 272).

Prosecutor Ignatiew’s weasel words, about German firearms being an after-the-fact claim that was never been mentioned by anyone until after the bullet shells were found, are also untrue. In a 1953 case, Judge Malkowski had brought up the shootings of Jews, by Germans, at Jedwabne. (p. 190).

It is inconceivable that Poles participating at Jedwabne had any choice under the Germans. Yet prosecutor Ignatiew was oblivious to this fact. (p. 194).

THE SUPPRESSION OF THE TRUTH

In no sense is a full exhumation redundant in any way. The archeological dig of 2001 had been preliminary, and had been severely hampered. The investigators, such as Andrzej Kola, were not allowed to move the skeletons, so it was impossible to determine if any bones had bullet-puncture holes or bullet graze-marks. (p. 270).

A lot of pressure was placed on the Polish government to stop the preliminary archeological dig of 2001. (p. 43). The Poles were reassured that the issue of Jedwabne is dead and gone, and will soon be forgotten. Yeah, sure. The Polish government caved, and was praised for the “wiseness” of its decision. And now Poles are told that there will be no new exhumation, because “everybody knows” that Poles are the guilty ones.

THE RELIGIOUS PRETEXT FOR NO RENEWED JEDWABNE EXHUMATION

Rabbi Schudrich’s frivolous objections are ironic. The ZIH has records of the exhumations of the Jewish dead, at various named places in Poland, in 1949, sponsored by the Jews themselves. (p. 212). No one then complained that Jewish religious law was being violated by doing so!

Sumlinski concludes that (roughly translated): “The blocking of justice-seeking historical investigation, by politicians, as a result of worldwide Jewish pressures, is a fact as obvious as day following night. Of course the politicians will deny this, but let us instead believe our own eyes and sound judgment.” (p. 210).

Related
Censored Holocaust Survivor Shows Warsaw Ghetto Uprising Greatly Exaggerated Gat
Not Just Another Holocaust Book, by Eli Gat. 2014 Suppressed Holocaust Survivor Book Shows the Insignificance of the Jews’ Warsaw Ghetto Uprising. Poles Betrayed Fugitive Jews in Ignorance The only United States library that owns this book, according to WorldCat, is the United States Holocaust Memorial Museum Library in Washington. D. C. (USHMM), and they […]
Arendt and Edelman Censored. JUDENRAT Collaboration Exculpated. Warsaw Ghetto Uprising Overhyped. Zertal
Israel’s Holocaust and the Politics of Nationhood, by Idith Zertal. 2005 The Legacy of the Holocaust on Israeli Society. Jewish-Nazi Collaboration. The Kafr Qasim Massacre This work focuses on the Holocaust as the raison d’etre of the State of Israel. It discusses Holocaust survivors, Israel’s wars with her neighbors as a thwarting of a […]
Censorship By Creating Orwellian Unpersons Example Zimmerman
The Polish Underground and the Jews, by Joshua D. Zimmerman. 2015 Much Information in a Contextual Vacuum. Effectively a Censorship By Making Orwellian Unpersons Out of Unwelcome Scholars and Their Findings The sophisticated reader who is looking for something new–a book that candidly addresses both sides of Polish-Jewish antagonisms–can stop right here. It does not. […]

To see a series of truncated reviews in a Category click on that Category: